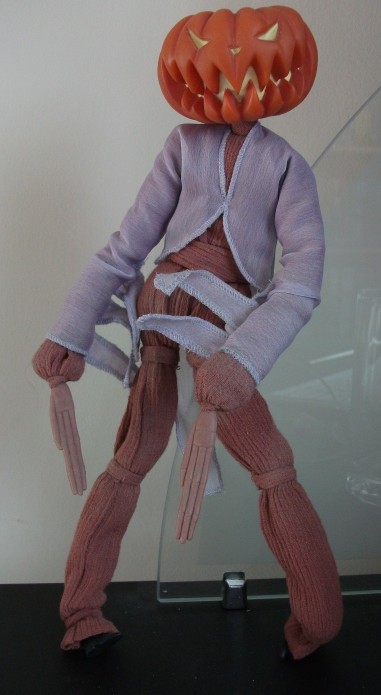 THE NIGHTMARE BEFORE CHRISTMAS

HAPPY HALLOWEEN EVERYONE!!  It’s October 31 and thus I wrap up Halloween week here at Mike’s Collection.  I know I should have started it earlier as I only managed to get 5 Halloween themed reviews in but I was busy with Halloween parties and such so what can you do.  This year I went out in two costumes.  My local comic shop Strange Adventures hosted a party at a bar called  the Foggy Goggle on the 20th of October.  I realize that the 20th is pretty early to be having a Halloween party but the following weekend they were going to be busy with the city’s annual Sci-Fi convention, Hal-Con.  The party started at 9 but we didn’t get there until 11 because we had tickets to see Norm Macdonald that night.  He was excellent by the way.  We didn’t think getting there late would be a problem but unfortunately the party was winding down by the time we got there.  We missed out on seeing many of the costumes and on the prize give-aways.  Before long Me, Vanessa, my pal Miguel and his girlfriend Ashley were pretty much the only ones left in the bar in costume.  This would have been awkward on the 31st let alone a full 11 days before Halloween.  I think we looked pretty good though and we did get props from a few other bar patrons.  There were some guys there celebrating a bachelor party who even had us sign their pub-crawl T-shirts in character.  I went out as Be-Bop, the punk rock warthog henchman from the old Ninja Turtles cartoon.  Miguel went as Baxter Stockman, the scientist turned fly from the same cartoon.  Vanessa was Cleopatra and Ashley was Harley Quinn.

This past Saturday Vanessa and I hosted a Halloween party at our apartment.  I could not wear my Be-Bop costume again because I had to shave off my purple Mohawk for the week of work that fell between the two parties.  So I decided to throw on my Cobra Officer costume which I had bought a couple of years ago.   There was one reason in particular that I decided to break out the Cobra costume again but I’ll talk about that in my next post.  Our Halloween party was a success with a decent turn out and my pal Andrew finally got to show off the Bane impression he’s been honing for the past few months.

Now today is officially Halloween but I don’t think I’ll be wearing any costumes.  I considered throwing on my Mexican wrestling mask for work today as a quick costume but I feel that full masks might be frowned upon in a government building.  So tonight all I plan to do is kick back and relax with my girl, an old horror movie and a bowl full of candy.  Not a bad way to spend Halloween if you ask me.

Now let me get to the final figure review of Halloween week.  I feel a little repetitive doing another Jack Skellington review but just look at this figure.  How could I not review him as my Halloween figure; this guy has a frig’n Jack-O-Lantern for a head.  This is Jack in his Pumpkin King guise from the opening scene of The Nightmare Before Christmas.  When we first meet the character he’s dressed as a scarecrow with this creepy pumpkin head dancing about in the Halloween Town parade.  It’s only after he torches this hay stuffed costume, dives into a fountain, then emerges from the water that we see Jack in all his skeletal glory.  Jack doesn’t make too many costume changes during the film but when he does each one is memorable and warrants its own action figure.  The pajama figure I reviewed a couple of days ago was a nice contrast to his usual black suit, and the Santa suit just made for a great visual.  This Pumpkin King getup is only featured briefly but I think it’s the most memorable alternative costume. 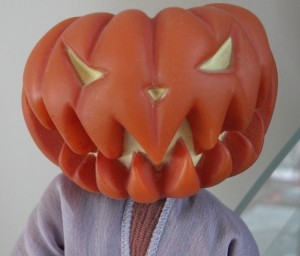 I think a JUN version of the Pumpkin King would be stellar but this particular figure falls a little flat.  This was given to me as a gift many years ago and I’m unsure of its origins.  It’s not exactly an action figure and not exactly a doll.  The body is completely wire so you can bend him into all kinds of suggestive positions.  The wire is surrounded by a soft cotton body that almost make him cuddleable.  He has small plastic hands and feet at the ends of his limbs.  His head is a made of soft rubbery plastic and feels like a dog’s chew toy.  The pumpkin head is pretty well sculpted and is a passable representation to what appeared on screen.   Unlike the JUN figure however you would never mistake this for an actual film prop.  This is one of those collectables that I would not have bought for myself but that’s what makes it such a nice surprise to receive from someone else.  5 out of 10. 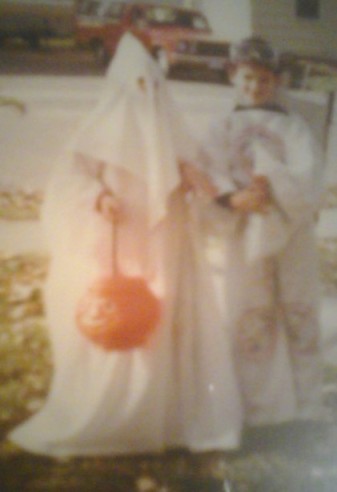 While we’re talking Halloween I thought I’d share this picture with you of me dressed up for Halloween circa 1986.  My friends all seem to get a kick out of it.  I had asked my mom to make me a ghost costume and I specified that I wanted to be a pointy headed ghost.  I was imagining a ghost like from the Ghost Busters logo or Casper’s evil brothers but this is the costume my mom made for me.  I’m hoping that the families I trick or treated that night understood that I was a ghost seeing as I was walking around with my friend Dana who was dressed as a Ghost Buster but I wouldn’t be surprised if they thought otherwise.  My mom swears that it wasn’t intentional….I dunno.

Posted on November 1, 2012, in Nightmare Before Christmas. Bookmark the permalink. Leave a comment.