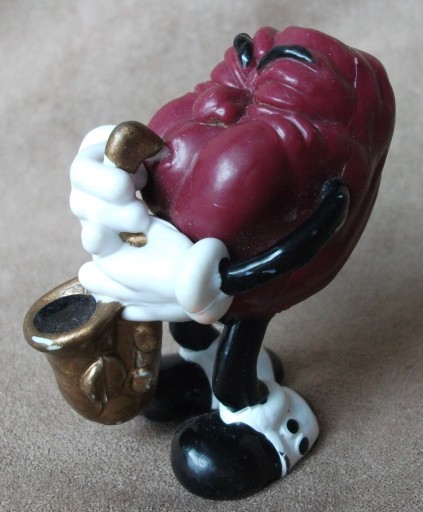 In one of my very early reviews on this site I covered the lead singer of the California Raisins whom I discovered was named Tiny Goodbite.  When I sat down to write that review I actually had no idea that any of the raisins actually had names.  There was a Raisins cartoon that aired for a short while in the 80s and I knew those characters had names but the cartoon didn’t feature any of the characters established in the figure line.  The figures were released through a fast food chain and didn’t come in fancy packaging that provided names for the characters.  So growing up I simply referred to them as lead singer, dancer with blue sneakers, dancer with orange sneakers, and saxophone player.  But using the modern marvel that is the internet I now know that these character actually had extremely clever names.  The singer was Tiny Goodbite, the blue dancer was Justin X Grape (get it?), the orange dancer was Ben Indasun (get it?) and the saxophone player was… saxophone player.  Apparently 3 clever raisin puns was all they could muster.  So I had this guy’s name right all along.

I don’t really have much to say about this wrinkled hunk of plastic.  With no name and no background story to tell you about I’m left with nothing but my own thoughts to offer you.  I covered all of my generic California Raisin memories in the last review.  I like this figure quite a bit.  Considering they were basically just  happy meal toys the amount of detail in these raisin figures is amazing.  The figures don’t have any moving parts; they’re just solid plastic figurines kind of like Smurfs or Snorks.  Their thin plastic limbs are quite malleable though which allows for some slight movement.  Unlike Tiny, Justin and Ben though, Sax’s hands are stuck to his horn and his horn is stuck in his mouth so there’s basically no movement at all.  He just stands in the back of the group looking good.  The emotion and intensity sculpted into each raisins face is insane.  This guy looks like he’s about to burst a blood vessel because he’s giving it his all on that sax.  His eyes are squeezed shut and his cheeks are puffed out, its really quite impressive.

Posted on November 18, 2012, in Miscellaneous. Bookmark the permalink. Leave a comment.