Just over a year ago I reviewed a rubber iguanodon toy that I’ve owned since I was a little kid.  I thought I had gotten rid of all of my rubber dinosaurs years ago until they turned up in a box at my folks place when they were doing some cleaning.  My dad set my rubber dinosaurs and my old hockey cards aside from the junk being discarded assuming that I might want them back.  He was right.  I was stoked to have all my rubber dinosaurs back.  Dinosaurs have always been my thing.  My brother Doug and I grew up with nearly identical interests but a love of dinosaurs and big monsters was mostly my domain.  In fact, I can only recall Doug ever owning 1 rubber dinosaur of his own, a Stegosaurus, where as I owned 8 or 9 dinosaurs.  There weren’t too many toy line from out youth where my collection outnumbered his.

My favorite dinosaur was always the triceratops.  How could you not think triceratops was awesome?  He’s built like a rhinoceros but with three horns on his face and a bone shield on the back of his head. 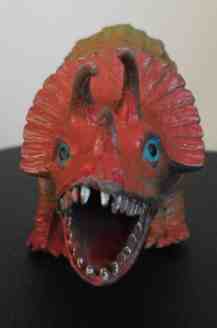 When I think triceratops my first thoughts go to this toy.  If you asked me to describe one I’d say, red face, green body, squatty legs, blank stare.  This is my default triceratops.  I love how the designers didn’t concern themselves with the fact that he’s a herbivore.  He looks just as much a deadly man-eater as my T-Rex figure, with that gaping mouth and needle-like teeth.  It may not be overly accurate but it made for a good toy.  His open mouth and hollow insides made him an excellent candidate to swallow up any  time-traveling interlopers.  I used my rubber dinosaurs with just about every toy line I owned.  Neither Snake Eyes nor Luke Skywalker could escape this guy’s wrath.

Despite his kinda goofy face this toy actually has a lot of nice details.  There are multiple sculpted wrinkles and bumps on the skin and his multi-colored paint job seems to have been done with purpose.  Call me nostalgic but this is a great toy. 6 out of 10.

Posted on November 29, 2013, in Miscellaneous. Bookmark the permalink. 2 Comments.