MASTERS OF THE UNIVERSE MINIS

The folks at Mattel have gotten crafty. In my Modulok review I mentioned how, as the line winds down, fewer of the monthly figures are essential purchases. Most of the main characters have already been released and as much as I’d like to have a complete set I simply can’t justify spending $25 on shipping to order a mediocre She-Ra supporting character that costs $27. Each figure ends up costing me over $50 and that’s far too much for a C-list character. However, when a C-lister comes out in the same month as an A-list character that I am willing to shell out the cash for, I usually end up buying the C-lister as well since the combined shipping lessens the financial impact.

Well beginning this past February Mattel began releasing a monthly two-pack of mini figures along with their regular 6” figure offering. The first set they released included a mini Mer-Man and a mini Battle Armor He-Man. Now I wasn’t completely sold on them when I first saw them online. Was this really something I wanted to collect? If the first set had been He-Man and Skeletor I probably would have passed. But because Mer-Man is my absolute favorite MOTU character I couldn’t resist. So along with Modulok I ordered this 2-pack of minis. 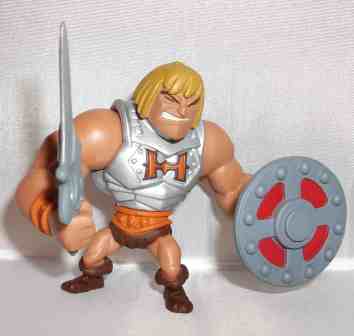 Once I got them in hand I thought they were pretty awesome. The sculpting is really nice and they’ve got a very stylized look to them that looks familiar but that I can’t quite place. They’re articulated at the neck, waist, and arms and I was surprised to discover that their weapons can be removed from their hands. Mer-Man comes with his sword and trident and He-Man comes with his power sword and shield. Their bodies are cutely disproportionate with bulking upper halves and tiny little legs. I like the look but it doesn’t lend itself to easily displayed figures. They seem to need the support of their arms/weapons to stay upright.

The colors are very vibrant and there are multiple paint applications. They both look great. I’m genuinely surprised to say that I think I prefer the He-Man from this pairing. There’s something about the half scowl on his face and the squinting eyes that I just love. I will definitely pick up more of these guys. And this is where the craftiness comes in…

Each set of mini figures includes a piece of a buildable mini Castle Grayskull. This first set came with the most vital part, the castle’s stoney skull visage. By including a piece of the castle with each set fans are forced to buy every single one if they want to build a complete castle. And if there are lots of fans like me out there, that locks us into buying at least the mini figure set from MattyCollector.com on the 15th of every month for the next 8 months (there are currently 8 mini figure sets planned). And if we’re buying the mini figure set anyway then we might as well buy whatever lackluster 6” character they’re shilling us as well.  My wallet weeps.

These figures are by no means essential to your Masters of the Universe Classics collection but if you’re a fan of cutesy versions of your favorite properties then these are pretty nice little figures. 7 out of 10.