Of the 15 figures included in the 2014 G.I. Joe Convention set, 7 of them were unique, individual characters. As a cost saving measure a few identical troop figures were included as well.  This is the case every year and I think the club has found a pretty decent ratio of  balancing individual characters with troop builders. I wouldn’t feel I was getting my money’s worth if the set contained a half dozen identical figures but at the same time getting a couple duplicates is nice since many collectors like to build small squadrons of the various Cobra troopers. I’ve already reviewed The Toxo-Vipers and the Toxo-Zombies. There were three of each of them in the 2014 set. The last troop builder included this year was the Cobra Lab-Rat, of which there were two.

The Lab-Rat was the first figure revealed by the club after the initial announcement that “Zombie Initiative” was the theme of this year’s set. I can’t speak for everyone but I feel the overwhelming response to this figure was “meh”. It’s not a bad looking figure, but it’s by no means a show stopper.

Apparently these guys were seen toiling around in the background of an episode or two of the 1980s Joe cartoon. I can’t say that I specifically recall them, and a quick google search fails to provide me with images, but if the Club says they were there then I believe them. It seems quite likely, given all the wacky experiments Cobra was involved in, that at some point a Cobra Trooper would’ve thrown on a lab coat. Besides, neither Dr. Mindbender nor his predecessor Dr. Venom can do everything themselves. Do you think Mindbender is capable of strapping Snake Eyes into the brain-wave scanner all by himself? Not likely. A scientist needs lab assistants and these 2 Lab-Rats fit the bill.

Yet, at no point was I ever playing G.I. Joe as a kid and lamenting the lack of lab assistants in the Terrordrome. It makes sense that they’d be needed in a real world laboratory but in the mind of a child who just wanted cool toys to play with they weren’t exactly a necessity. Back in the day I would’ve just had a Tele-Viper or a Techno-Viper assisting in the lab as required. While they had specialized skills (communications and battlefield technician) I viewed them more as Cobra’s general services technicians. I used to work as a general services technician in a government office and my duties encompassed all kinds of stuff like hanging pictures, wheeling video conference equipment from room to room, installing keyboard trays, shredding confidential waste, you name it. Not that I was so lame a kid to actually have my Techno-Viper shredding papers when I was playing with my toys but “off-screen” it would’ve been those guys handling those duties in my Cobra HQ . But even though I had my lab adequately staffed back in the day, it is nice to actually have specified Cobra lab personnel now.  No longer will a communications officer be forced to perform tasks such as splice Serpentor DNA or refill the rare element containers on the MASS device. 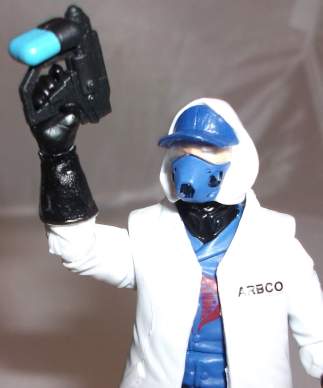 The Lab-Rat is made up completely of used parts and it shows. His body is borrowed 100% from Cobra Commander. Re-used parts aren’t usually as noticeable as they are here but ol’ CC has a pretty specific look and the Club didn’t even change the color of the outfit so it’s pretty much a straight Cobra Commander body. At least the added white lab coat hides the body to some degree. The Lab-Rat’s head is the extra head that came packaged with the “Pursuit of Cobra” Dusty figure in 2010. It’s not an immediately recognizable Joe head and it works reasonably well for a lab technician so its a good choice. Goggles and a gasmask seem like good things to have in a Cobra laboratory. God forbid you breathe in some of that Venomous Maximus transforming gas. Lab Rats are clearly more safety conscious than Cobra’s head scientist Dr. Mindbender who can’t even be bothered to wear a shirt to work. 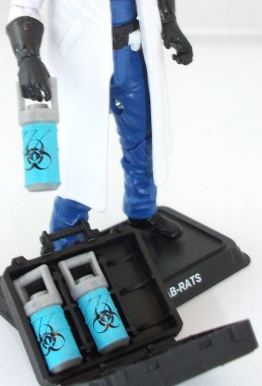 Despite the recognizable Cobra Commander body this combination of parts works quite well together. This is pretty much exactly what I would expect a lowly Cobra lab technician to wear; a blue cobra outfit and a white lab coat, what more do you need?  One neat thing about the coat is the Arbco badge.  Arbco is the name of the front company Cobra often hides behind (it’s just COBRA with the letters scrambled for those of you who aren’t too swift).

Each Lab-Rat comes with a display base, an oversized calculator which I think is supposed to be a computer of some kind, an injection gun loaded with Compound Z, and a brief case complete with 3 removable Compound Z canisters. We’ve seen this briefcase and canisters before but it’s a cool accessory that fits the theme of the set.

This year’s convention set clearly gave us a good batch of figures because the Lab-Rats are the weak link of the group and even they’re still kinda cool. Like the Medi-Vipers of 2005, the Lab Rats fill a hole in the mundane administrative /corporate side of Cobra. Nobody was clamoring for them but here they are and that’s okay with me. These are the kinds of figures that make me wish I had room to set up elaborate dioramas. 6 out of 10.